Facebook has launched a virtual reality app to serve as a perfect alternative for holding online meetings as it gives a raw feel to coworkers as though they are physically present in a round table discussion.

The app called the Horizon Workrooms was launched on Thursday, it is free for users of its Oculus Quest 2 headset, a device whose price starts at $299. Per meeting, a Workroom allows 16 VR headset users, each with a 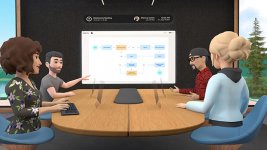 display customizable animated avatar that floats slightly above a virtual chair at a table. The avatar of a VR user moves in the exact direction of the user’s fingers and hands and even their mouths while they speak.

In total, 50 people can participate in a meeting as the non-VR headset users can join as video callers. This appears inside the virtual meeting room via a flat screen. Also, there is a virtual whiteboard for presentations and picture sharing.

“The pandemic in the last 18 months has only given us greater confidence in the importance of this as a technology. Facebook has been using the app internally for about a year.” Andrew Bosworth, VP of Facebook Reality Labs, said at a virtual room meeting on Tuesday.
You must log in or register to reply here.