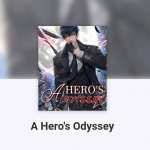 A Hero's Odyssey Novel story is about Fan Hunjun, who was being set up by his stepmother 7 years ago; he was sold to the chaotic country S. But instead of dying there, he learned martial arts and came to led a group of elite mercenaries. 7 years later, he hid his identity and came back in secret. His old-time crush held him in low regard, but much to her surprise, a bunch of gorgeous ladies crowded around him, vying for his affection. To help his friend in distress, he deployed an army to eliminate the enemy's headquarter. One at a time, he would exact his vengeance on those who had bullied him and wronged him in the past! Read now from the attached PDFs below, and together we shall find out how he delivered his justice.

please add more chapters we are hanging by a thread
N

It seems this novel is different from the one by Skykissing(A hero's odyssey).

Am kinda confused.
You must log in or register to reply here.