Google?s market cap passed Microsoft?s in early trading on Monday, making the search engine giant the second most valuable technology company in the world behind Apple.

Google?s stock has been on a tear ever since mid-July, passing $700 a share in early September and hitting a new intraday trading high of $747.28 just a few weeks later. Since then, the stock has continued to tick up gradually and is currently trading above $760 a share.

For Google, the stock?s rise is tied to strengths in several key areas, including positive reports about its displaying advertising and growth in mobile activations. On Friday, Jefferies analyst Peter Misek told Barron?s that these and other factors put Google in a great position for long-term growth.

Microsoft?s stock, on the other hand, has been on the decline in the past couple weeks on fears about the health of the PC industry and uncertainty about the prospects for its latest operating system, Windows 8.

Google is quickly closing in on Walmart, which has a market cap of just under $250 billion, to become the third biggest U.S. company behind Apple and Exxon Mobil. 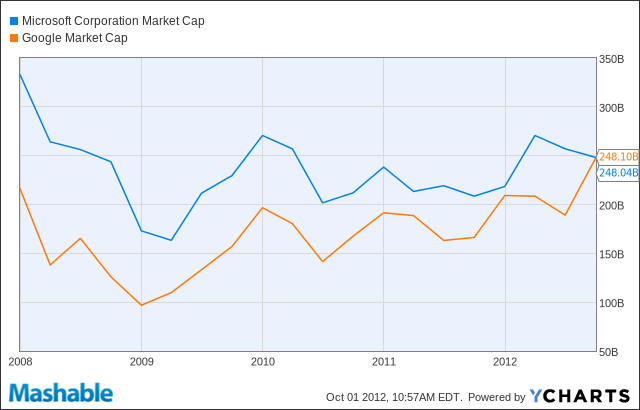