"The HUAWEI Ascend Mate breaks barriers to deliver a supercharged entertainment, communication and creative experience for all your personal and professional needs," said Richard Yu, CEO, Huawei Consumer Business Group. "The HUAWEI Ascend Mate is an industry-leading smartphone and showcases our innovation as we continue to make great technology available to more people globally."

HUAWEI Ascend Mate has a screen-to-body ratio of 73% - the highest in the industry - which maximises your viewing pleasure for emails, documents, video or games. The 6.1-inch HD IPS+ LCD screen has a resolution of 1280 x 720 for unsurpassed clarity and colour accuracy, and ?Magic Touch' which provides enhanced screen responsiveness even with gloves. The Ascend Mate is slim and stylish, designed to fit comfortably in a single hand at just 6.5mm thin at its narrowest part.

HUAWEI Ascend Mate features a 4050 mAh battery and Huawei's Hi-Silicon 1.5 GHz quad-core processor. With Huawei's QPC and ADRX smart power-saving technology, the smartphone provides up to two days of ordinary useage on a single charge. It has the fastest battery charging capability of smartphones in its range, which saves over 30% of battery charging time.

Together with global roaming functionality, the HUAWEI Ascend Mate supports five frequency bands making this smartphone perfect for international travellers. Its dual-antenna design supports high power data transmission and is optimised with maximum ratio combining method, to increase network reception by up to 2.5dB and providing an increase of 20 to 30% of overall network coverage.

Available in crystal black and pure white, the HUAWEI Ascend Mate will be on sale in China in February 2013.

Huawei Device believes that everyone can be the centre of information and that the world would be a better place if access and information barriers were knocked down. Its strong suite of mobile phones, mobile broadband devices and home devices is testimony to Huawei Device's focus on customers and its commitment to providing user-friendly mobile internet experiences through
ongoing innovation. Based on more than two decades of success in the information and communications industry, and with our own channel expertise, operational capabilities and globalpartner resources, Huawei Device is transforming from a company that sells millions of devices in single transactions to large businesses, to a "Business-to-Customer" (B2C) brand that also sells individual devices directly to millions of people. As at the end of 2012, Huawei Device serves more than 500 operators all over the world. For more information, visit Huawei Device  source: 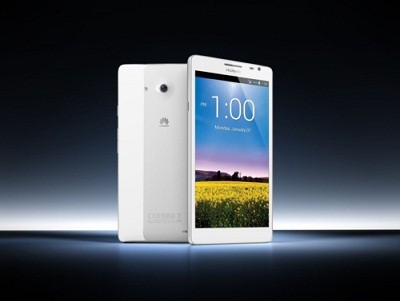