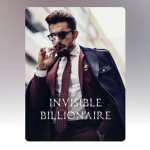 Gong Zi Ge Er authors the Invisible Billionaire novel. He's an excellent online novelist whose novels are rich in plots, distinctive personalities, and humorous language and very popular with readers. It is about a university student of the new star era named Ji Tianxiang, who was indeed poor, picked up scraps from the school for a living. He was known as the prince of scraps, but unexpectedly, there was a hidden, amazing background behind him.

In the eyes of outsiders, he was just an inconspicuous poor student in the college. In order to buy a new mobile phone for his girlfriend, he had to do part-time jobs to earn some extra money. While working, he was mistaken for a thief. Not only was his reputation ruined, but his girlfriend had also broken up with him. However, in fact, he was an heir to the wealthy Ji family. However, every heir to Ji's family had to go through the trials of living in poverty when they were young. On the day, his test period had finally ended. A peerless beauty came to him, claiming to be his personal secretary.

Bro please update
You must log in or register to reply here.