Poo powered motorcycle kicking up a stink in Japan

Created by Japan's leading toilet makers TOTO, the energy efficient bike certainly meets the motor industry's demand for more climate friendly vehicles.
Talks to turn the ambitious project into reality have been on-going since 2009, with the latest version of the 'Toilet Bike Neo' making its debut at s showroom in Fujisawa, near Tokyo, on Thursday.
The environmentally friendly three-wheel 250cc motorcycle features a specially customised toilet-shaped seat that runs on bio-fuel from the discharge of livestock or waste water.

Despite the eye-catching seat, TOTO is keen to point out that the motorcycle does actually not run on the rider's waste.
'Toilet Bike Neo' does not have the mechanism to run on the rider's waste,' explained the company in a blog post.
'It runs biogas fuel (fertilised, purified and compressed livestock waste and household wastewater) provided by Shika-oi Town in Hokkaido and Kobe city.
'Therefore, the Neo rest seat does not function as a toilet, and has been created for promoting TOTO's environmental efforts. 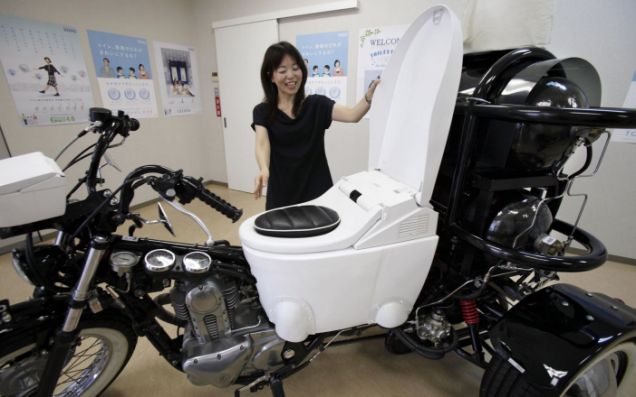 'TOTO has set up the project to inform everyone about what we have done in the past, and what we will do in the future.'


source:: http://www.metro.co.uk/weird/909601-poo-powered-motorcycle-kicking-up-a-stink-in-japan#ixzz24xklBfYc
You must log in or register to reply here.