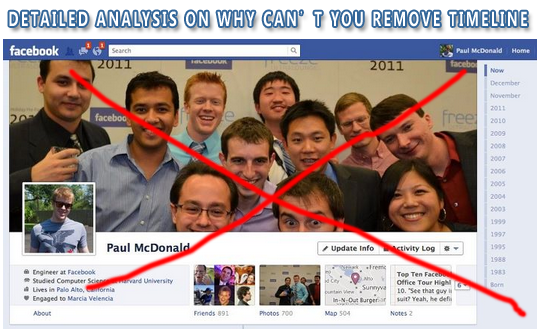 After 6th December, Facebook Timeline has completely transformed the shape of old FB profiles. Some users are finding the new layout pretty complicated and unfamiliar. Whether it may be new advanced privacy settings or the new profile design, Facebook new changes are always somewhat not unanimously accepted by the 800 Million registered users.  The new Timeline design display all your posts in hierarchal way, giving more importance to your memorable posts, photos and events.
There appears to be no option which could remove timeline or undo the new profile design change so that you could revert back to the old profile layout. No method so far seems to work, neither disabling the timeline app  is working. The Timeline App was a method by which you could set up timeline before its launch. There must be reasons behind absence of timeline Removal option. Lets analyze some facts.
! Private video
Zukerberg Recently blogged about his <a href="http://blog.facebook.com/blog.php?post=10150378701937131">commitment to Facebook community</a> saying:

I founded Facebook on the idea that people want to share and connect with people in their lives, but to do this everyone needs complete control over who they share with at all times.
This idea has been the core of Facebook since day one. When I built the first version of Facebook, almost nobody I knew wanted a public page on the internet. That seemed scary. But as long as they could make their page private, they felt safe sharing with their friends online. Control was key. With Facebook, for the first time, people had the tools they needed to do this. That's how Facebook became the world's biggest community online.  We made it easy for people to feel comfortable sharing things about their real lives.
We've added many new tools since then: sharing photos, creating groups, commenting on and liking your friends' posts and recently even listening to music or watching videos together. With each new tool, we've added new privacy controls to ensure that you continue to have complete control over who sees everything you share. Because of these tools and controls, most people share many more things today than they did a few years ago.
Overall, I think we have a good history of providing transparency and control over who can see your information.
That said, I'm the first to admit that we've made a bunch of mistakes. In particular, I think that a small number of high profile mistakes, like Beacon four years ago and poor execution as we transitioned our privacy model two years ago, have often overshadowed much of the good work we've done.
Click to expand...

The highlighted words are where Mark himself accepts some of his past mistakes. Beacon was Facebook's advertisement system that sent data from external websites to Facebook, for the purpose of allowing targeted ads and allowing users to share their activities with their friends. The controversial part was that Facebook was publishing User activities from other websites without explicit permission from the user. This was a complete violation of user privacy. All this was done without letting you know!
The purpose of sharing the Beacon story is to tell you that Facebook have often taken decisions without keeping user feedback greatly in mind. Now when the entire Layout was going to be transformed, no proper Feedback campaign was ran which could ask users about their likes and dislikes concerned with the new timeline Design. Yes they tested a beta version of timeline and allowed users to try timeline in advance but why not User Feedback again?
Mark promised on November with his blog post that user response will be given great importance but I never get it why the same mistake is repeated again?
Now lets know the reasons that why can't your remove, undo or delete the timeline view.
1.To Prevent Algorithm Conflict
Things look simple when they look alike. In order to prevent development ambiguity/complexity, all layouts are given same design structure so that it becomes easy to organize the data using the same technique without the need of two different methods for the display and arrangement of the same data on Facebook servers.
2. To Prevent Psychological Confusion
If the option of removing Timeline existed then it would have given rise to great confusion in interface. Facebook users are of different age and are experimented to like simplicity in design and structure. If your friend is running a timeLine and you are running Old Profile, then of course you will find it difficult to understand the updates at his profile due to different organization of data. What is placed at your left is shifted to top and right on timeline. This can discourage users from using Facebook and then can probably look for an alternative simple social media network like Google+.
3. A Challenge to Google+
Google Plus is the new social networking website which was launched just this July by Google Inc. Almost all features in Google+  match that of Facebook accept the introduction of Sparks, Circles and video conferencing. In order to tell its users that Facebook offers much different social touch a step like this was important. I must inform you that Facebook knew about the Google+ development and all its features much before it was launched. Because keeping an eye on your competitor is an important principle of i-marketing.

What do you think?
In short it is hard to believe but once again the new look has been forced upon the users without keeping the community likes and dislikes in Mind. I would love to hear about what else can you share on this latest development and do tell me if you like the new layout or not. Please give reasons why you like it. Hope to see some comfortable new changes in FB's new design. For the time being new creative tricks are been applied to Timeline Covers. Why not Create a Hot Cover for your Profile?


Peace and blessings pals!
You must log in or register to reply here.
Related Topics