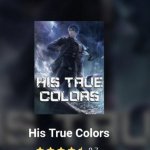 His True Colors Novel is an old Chinese novel translation that's still ongoing in most apps. Here, you can download the later Chapters of His True Colors PDF. The Novel story is about Han Jingru, who suffered all kinds of degradation and deride. But it was nothing compared to how much he was broken after getting chased out by his own family. The man gave in and surrendered to his fate. He even got used to the daily insults and mockery.

The Su family was only a second-tier family. But when Han Jingru was forsaken three years ago, it was the Su family patriarch that took him in and arranged his wedding. At that time, the wedding had completely turned Yun city upside down, but for the worse reason: that Su Yimo married an utter loser. The family became the joke of the entire Yun city. The Su family patriarch was the only person that knew Han Jingru’s real identity. But two months after the wedding, the old man passed away due to his sickness. And from then onwards, no one knew his real identity.

Follow my uploads below to download His True Colors Chinese Novel Story by Han Jingru in full PDF format.

Did you click on the button to download the PDF offline? It's working correctly at this end.

zeal said:
Did you click on the button to download the PDF offline? It's working correctly at this end.

Update: I have re-uploaded it as requested!!
Click to expand...

Thanks a lot for the Re-upload, you're the best

I have added it to the list. Thanks for pointing that out

zeal said:
I have added it to the list. Thanks for pointing that out
Click to expand...

After upload 1361-1385...it looks like the uploaded files are from some different translation..bcoz characters names are different. Pls upload the translations containing previous names.
You must log in or register to reply here.